History of Palaces in Europe

European Palaces Decor: The absolutist system favored the construction of palaces throughout Europe. The French palace is different from Spanish or Italian. The structure of the French palace is a U-shaped floor, so that it opens to the outside to a patio. This patio is separated from the outside by a partition or a fence, insulating the building as if it were a moat. Together with the towers that sometimes appear in the corners, it is a reminder of the fortress castle of feudal times. The main rooms are located in the wing located at the bottom of the courtyard and open towards it, which is about balancing an opening to the outside with a certain sense of privacy.

The interior decoration is fundamental to the atmosphere of any palace. In France, at the beginning of the 17th century the interior decoration was sober, as seen in Maisons-Lafitte (Built by .François Mansart (1) between 1642 and 1646 for René de Longueil, Président de Maisons.) where it has been preserved almost intact. Then in the 17th century it will change and it will be a style of its own.

It was first established by Charles Le Brun (2), who used it in the decoration of Vaux-le-Vicomte in 1661. In this building he decorated some rooms based on panels with traditional motifs, but in others, among which the King’s bedroom, used a novel style in France that imported from Italy.

This novel style combines stucco, decorations and painting according to some Pietro de Cortona (3)  formulas at Palazzo Pitti. Thus, an ideal combination of various arts was achieved in which Louis Le Vau dealt with architecture Gilles Guerin (4) and Thibault, with sculptures and Le Brun himself, with pictorial art.

This decoration typical of Italian baroque art was modified in the French style. The illusionist pictorial effects are scarce, leaving the sculpture and painting perfectly defined, without invading any area of ​​the other. That decoration caused astonishment and, after the party of August 17, 1661 that dragged Nicolas Fouquet (5) to jail, Jean-Baptiste Colbert  (6) took advantage of the team of artists and the new style for the royal palaces. This equipment was used for the first time in the restoration of the burning areas (1661) of the Louvre Palace.

Here the old Gallery of Kings burned became the Apollo Gallery, starting the decoration under the direction of Le Brun in 1663. For this work the same stylistic principles were applied as in Vaux-le-Vicomte, although with a larger budget and a more luxurious style. This work was just finished recently in the 19th century, because the artists were transferred to another even bigger one. We are referring to the Palace of Versailles (7)

Versailles became the center of the artistic developments of the Crown, with more budget and a grandiose style that would be imitated in almost all the palaces (including private residences) of Europe that were built after Versailles.

In Versailles the original decoration is preserved in the Grands Appartements, where 1671 and 1681 were worked with a richer style than that of the Louvre’s Apollo Gallery. In this style two criteria were used. The one, the walls were covered with velvets, usually green or crimson ornamented with drawings, hanging there paintings by Italian artists. In the other style instead of velvets marble plates of different color were used.

The halls were decorated according to the relationship with the planets and Greek and Roman mythology. The subjects painted on the ceilings related to the exploits of the monarch, comparing them sometimes with similar episodes that occurred in antiquity. In these cases, the style used in Vaux-le-Vicomte to mix paint and stucco was followed. Versailles is the most representative of the European palaces decor 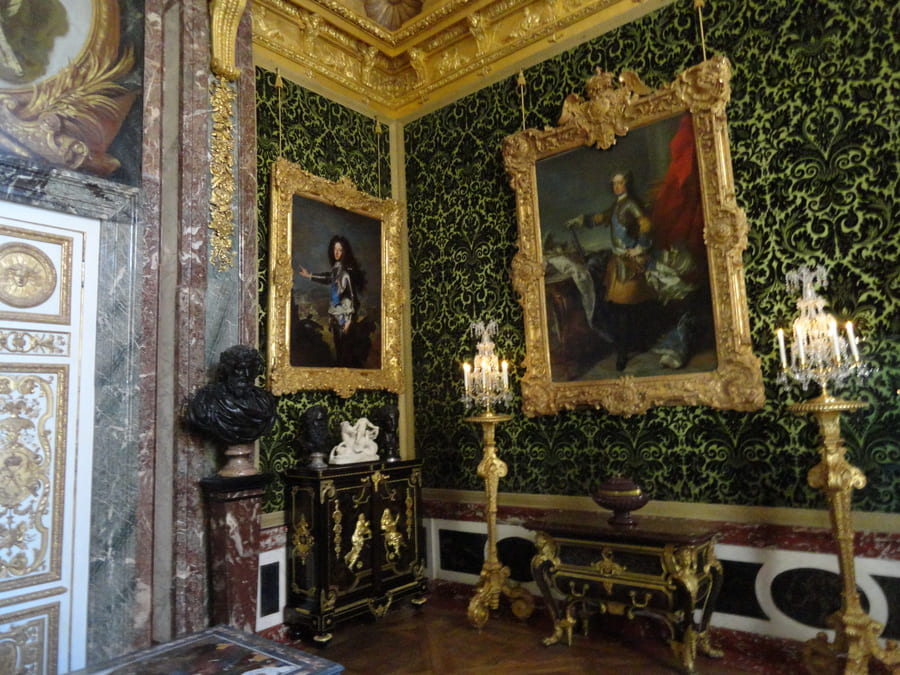 The Staircases of Palace

In the Queen’s Guard Room, the Staircase of the Queen and the Staircase of the Ambassadors, reasons for trompe-l’oeil were made.
Stairs of the Ambassadors was designed by  Louis Le Vau (8)  and built in 1671 by François d’Orbay. This staircase was a work of art in itself that was composed of two ramps opposite each other and parallel to the wall. Here the design of Francesco Primaticcio (9) was followed in the Belle Cheminée wing of the Fontaineblau palace.

The decoration was completed in the halls with luxurious marble floors. These floors were built in 1684 for practical reasons and replaced by other less cold materials, like wood. So far came the era of Colbert in the construction of Versailles. In In 1683, Colbert died and Louis XIV appointed Louvois to his position.

This succession marked a change in the decoration that thereafter was made in Versailles until its completion- The new minister, unlike Colbert, yielded to all the king’s whims in order to keep him happy. So for five years there was a big increase in the budget that had a correlation with the decorative and artistic works. The  Marquis of Louvois  (10) favored to Mignard over Le Brun, giving Jules-Hardouin Mansart the initiative in the decorative aspects.

The Louis Philippe staircase is of a very simple construction compared to other stairs that can be found in Versailles. The floor decoration changes between square tiles in black and white, similar to those of other palaces such as Chenonceau. The walls surrounding the staircase are made of green and gray marble. It is named after Louis Philippe, who became King of the French in 1830 with the restoration of the Bourbon monarchy. On the roof there is a vitreaux that lets in plenty of natural light

The Queen or Marble Staircase

When you reach the top of the Marble Staircase, you enter the Queen’s Guard Room. Then you can enter their apartments. The staircase is named after the amazing amounts of marble that were used in its construction.

Gilded bronze reliefs have been added to the doors in 1681. The gold engravings continue to the ceiling. France’s arms flanked by palm leaves and the fleur de lis of the French monarchy stand out. Red, white and black marble was used to distinguish the foundations of the stairs. The pilasters are crowned with golden caps.

Two false doors have been added to create symmetry. Both Doors are made of glass. The floral ornaments of the stairs are from the painter Jean-Baptiste Belin  (12) . There is a golden sculpture on the landing on the first floor. Two large interlocking L adorns a shield crowned with a crown and flanked by olive branches. The shield is carried by two cherubs. On the first floor there are three large windows that illuminate the stairs.

During the French Revolution, on October 6, 1789, the crowd stormed the Palace of Versailles. It was through the marble staircase of the Queen, that they accessed the guard room where they were killed.

In 1720 the Castle of Chenonceau was bought by the Duke of Bourbon, who sold the works of art and statues of the castle Some of those decoral statues today the Palace of Versailles.

The Hall of  Mirrors

The last performance of Le Brun with the decoration in Versailles was his work Summit. The hall of Mirrors. This work is the most representative of the Reign of Louis XIV and by far the most luxurious. Jules-Hardouin Mansart wanted a more sober decoration for this place. But Le Brun, who was aware that this was his last performance, won the approval of France’s King Louis XIV  (11)

The Salon or Hall of Mirrors –  Palace of Versailles is an ornate architectural complex, where there are many figures and symbols. The living room is a long gallery 75 meters long and 10 wide, which has 17 large openings on one of the sides that correspond to the many mirrors in front.

These mirrors had the fundamental purpose of increasing natural and artificial lighting. They also created the illusion by expanding the space of the room and lends itself to the Baroque surprise character effects.

24 pilasters of red marble with bases and capitals of gilded bronze were arranged and at certain intervals niches were opened in which statues of mythological divinities were installed. On the ceiling, the vault is surrounded by trophies and shows paintings describing the military glories of Louis XIV.

The furniture set was luxurious, and many of the pieces were silver. The Ox Eye Salon designed by Jules Mansart is the most representative of the new taste. Decorated in 1701, priority attention is already appreciated in not reloading the decorative elements. The panels become lighter and the mirrors appear as essential. The heaviness of many ornaments also disappears and in essence, everything becomes much more elegant.

The last refurbishment of the hall of mirrors was carried out in the twentieth century where some very deteriorated mirrors were replaced by new ones of mercury material. The wooden floors were completely replaced, although the electrical installation was done before. The hanging lamps adapted to the new technologies. Bulbs were also installed that, although they are electric, simulate old candles.

(1) – Jules-Hardouin Mansart: French architect (Paris, 1646- Marly, 1708). Prolific author of civil works. He took over the completion of the Palace of Versailles. See More

(2) – Charles Le Brun : French painter (Paris, 1619-1690), whose classicism would make him one of the most prestigious artists of the court of Louis XIV. See More

(3) Pietro de Cortona belongs to the initial period of the Baroque. He is known primarily for his work in the field of decorative frescoes and painting. See More

(4) Gilles Guerin: French sculptor (1606-1678), disciple of Le Brun. He was a member of the Academy of Painting and Sculpture in Paris. See More

(7) The Hall of Mirrors Official Site – Palace of Versailles – France

(9) Francesco Primaticcio: Italian painter and sculptor (Bologna, 1504- Paris, 1570). Working with Rosso Fiorentino in the court of Francisco I he became head of the Fontainebleau School. He was one of the great exponents of Mannerism. His elegant, refined and artificial style was decisive in the evolution of French art. See More

(12) Jean-Baptiste Belin   painted floral murals in several of the royal chateaus, including Fontainebleau and Versailles, where he worked on the Escalier de la Reine (Queen’s Staircase), See More

Scroll back to top