Decoration and Architects of Chenonceau Castle

You can know the history of a building through the works of its builders. This is the History of the architects of the Castle of Chenonceau.The castle we know today was built on the demolition of an old fortress and a fortified mill owned by the Marques family.

From that time only the tribute tower that was modified in the style of the time and its new owners survives. Built by Thomas Bohier, Intendant General of Finance of King Francisco I of France between 1513 and 1521.

The main part is rectangular (50 x 55 meters) where the hallways and rooms are. In charge of overseeing the construction was his wife Katherine Briçonnet, since her husband was busy with the matter in court.

Gardens and architects of the castle of chenonceau

At the death of Mr. Thomas Bohier the crown ordered an audit of the kingdom’s finances. The results were charges against Thomas Bohier for misappropriating funds against the crown, for which his assets were expropriated.

The crown recovered the royal dominion over the castle and at the same time King Francisco I gave it to his favorite Diana de Poitiers, Duchess of Valentinois.

As of that moment the destiny of the Chenonceau castle was marked by the presence of six more women. Here we detail them and the brands that they printed until today, the most visited castle in France. 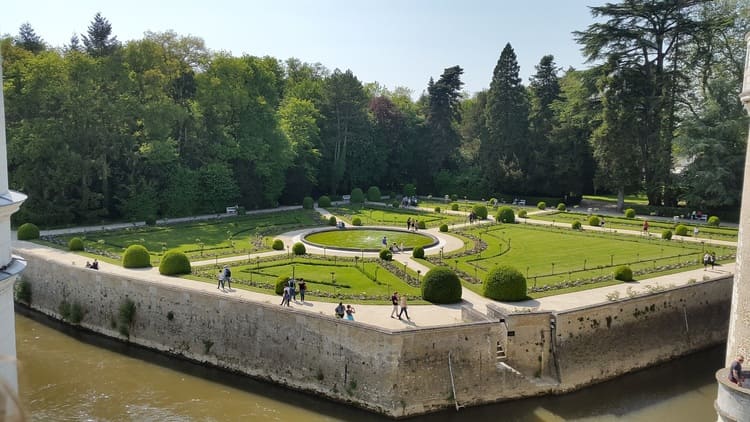 King Henry II gave the Chateau de Chenonceau to his favorite, Diana de Poitiers in 1547. Diana commissioned Pacello da Mercoliano to design and build the gardens, which were the most beautiful of that time. The architect Philibert de l’Orme was entrusted with the task of building a bridge over the cher river in order to extend the gardens to the other shore. Diana de Poitiers managed to get Francisco I of France to settle in the place next to the whole court.

Henry II, King of France, died of injuries caused accidentally while participating in a tournament in 1559. Catherine de Médicis, wife of the deceased monarch, became the regent of the Kingdom of France, since her children were younger than age.

Catherine forced Diana de Poitiers to cede the property of the castle to the crown in exchange for another nearby Chateau: Chaumont-sur-Loire. It expanded the existing gardens and improved the building’s body with reforms.

It was at that time (1576-1577) that the double-story gallery where the parties were organized was built by one of the architects of the Castle of Chenonceau: Jean Bullant. The gallery was built on the bridge and is the aspect that can be seen today. From the green cabinet being regent, Catherine de ‘Medici was in charge of the affairs of the Kingdom of France.

It should be noted that the original plans and designs of the gallery belonged to the architect Philibert de l’Orme, who had built the bridge. The gallery is 60 meters long and 6 meters wide. It has 18 Windows, floor of mosaics of tuff and slate, shaped like a chessboard. It was inaugurated in 1577 during the celebrations organized by Catherine de Médicis in honor of her son King Henry III of France.

Henry III King of France and son of Catherine de Médicis, died in 1589. His wife Luisa de Lorraine retired to the castle of Chenonceau wearing the usual white mourning (label of the time). He lived until his death in the castle almost without leaving it. After Luisa de Lorena there was no more presence of the Crown of France in Chenonceau. It was already in private hands. By inheritance of Luisa de Lorraine the castle was inherited by César de Vendôme and his wife, Francesca de Lorraine, Duchess of Vendôme. For the next 100 years, it was inherited through the Valois family.

In 1720 it was bought by the Duke of Bourbon who sold them works of art and statues of Chenonceau. Some of them went to the Palace of Versailles. In the summer of 1733, Claude Dupin bought the castle of Chenonceau from the Duke of Bourbon. His wife, Louise Dupin in organized meetings and gatherings with writers, poets and scientists. Voltaire and Rosseau were regular. During the French Revolution and under its administration, Chenonceau was preserved almost intact.

Marguerite Pelouze bought the Château de Chenonceau in 1867, which at that time had 136 hectares of land. I buy it at 850,000 francs. Then he decided to restore the castle as in the time of Diana de Poitiers. The works were executed from 1867 to 1878 by the architect Félix Roguet. During this restoration almost all the changes made by Catherine de Médicis are eliminated.

In 1879, Claude Debussy joined the chenonceau orchestra as a pianist, with the purpose of completing the castle’s small chamber orchestra. Debussy spends almost all that summer in Chenonceau. One thinks that the sculptor Jean-Baptiste Gustave Deloye, was the author of the caryatids (Column in the form of feminine sculpture) of the castle.

In 1888, Marguerite Pelouze, already separated from her husband, filed for bankruptcy and sold the Chenonceau castle. Acquired by Crédit Foncier, and sold in 1891 to Mr. José Émilio Terry, deputy of Cuba in the Spanish Cortes. His family will retain the property of castilool until 1913

The Terry family in 1913 sells Chenonceau to industrial Henri Menier (1853-1913). The Menier family is the owner of the castle today. During the First World War, a hospital for the war-wounded was set up in Chenonceau, funded by Mr. Gaston Menier (1880-1933). Simone Menier, wife of Georges, as head nurse, administered the hospital that installed 120 beds in two of the Galeries of the castle.

In a room in the castle of Chenonceau X-ray machines were adapted an X-ray machine. Also 2,254 soldiers were treated at that hospital during WWI. After the war, the equipment was dismantled and stored for years. Decades later in an auxiliary room of the castle, the hospital was assembled again and turned into a museum

Military Hospital of the Chenonceau Castle

The main gallery, the covered bridge that crosses the river Cher, was used during the Second World War by the French resistance. The castle was used for people to escape to Free France, taking advantage of the fact that it was on the border. It turns out that south entrance faced France Vichy “free”. and the rest of the castle was in the area occupied by Nazi Germany.

The castle during World War II suffered some damages by bombing of both sides, damaging in a total way the windows and vitreaux. These stained glass windows were repaired after the fight was over.

There were several illustrious visitors after its opening to the public in 1952. Among them we can mention the Queen of England Elizabeth II, her son Carlos and Diana Diana, Princess of Wales. Also the president of the United States Harry Truman visited Chemonceau.

In the Castle shop you can buy souvenirs of the visit, books and vintage posters

Summing up The architects of the Castle of Chenonceau, were:

See Gallery Pics of Castle of Chenonceau in Pinterest

This is a collaboration of the blog traveling-cook.com, of a note translated from Spanish. The original note can be seen here . Part of the images are property of quierodecorarte.com.