People all over the world use bidets to clean themselves after going to the bathroom. In Western Europe, South America, the Middle East and Asia. It is an acquired custom

There is a place where bidets (bidet toilets or Washlets) are not so popular. Why have bidets not caught on in the US?

The use of water for cleaning the back of the body has been used since ancient times. In the Middle East, South Asia and other regions had been using in containers with water,

The water was used with the hands to wash. At first, it was mainly for the upper class, but in the 19th century, indoor plumbing led to the bidets we have today. Here you can see the History of the Bidet. 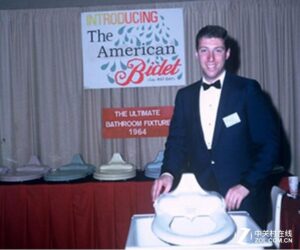 Americans first saw them in WWII in European brothels, which is why many associated them with brothels. In 1960 Arnold Cohen tried to introduce them to the United States, but it was a failure. Nobody really wanted to “hear about Tushy Washing 101”.

Why hasn’t America Embraced the Bidet?

Bathrooms in the US are not made for bidets. There is no extra space or plumbing for bidet accessories. But the most important reason is habit. Most Americans grew up using only toilet paper. It is also possible that many do not even know that it exists and that there is an alternative way to stay clean.

Since there is no place to add an additional fixture to the bathroom, an accessory can be added to the toilet. Thus, you already have two utilities. Bidet accessories to mount on the toilet come with all the technology.

Using a Bidet: Savings and Ecology

In the United States, an average of $ 40 to $ 70 a year is spent on toilet paper per person. Approximately 34 million rolls of toilet paper are used per day. It will also save some 384 trees that are cut down to make a single person’s lifetime supply of toilet paper.

But washing with a bidet can help with cleaning, which can lead to fewer rashes, hemorrhoids, urinary tract infections, and other medical problems. The toilet water to clean your backside is safe. It’s tap water. o Like the water in your sink.

So try the bidet. Or start with a toilet seat accessory. Because in the end, it’s just about washing without getting in the shower, saving money and being environmentally