History of the Modern Toilet

The Romans came very close to the current idea of ​​the toilet with their system of public latrines with running water, which immediately flushed waste into a series of underground sewers. In this way, unpleasant odors were kept to a tolerable minimum.

The collapse of the Roman Empire put this system into oblivion and for centuries the urinals were emptied out the windows shouting “Water goes!” This practice helped spread typhus and all kinds of infectious diseases. 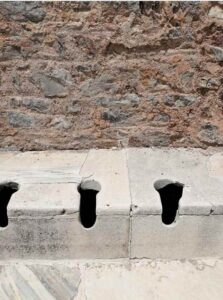 In 1596, Sir John Harrington, godson of Queen Elizabeth I, conceived a toilet connected to a water tank that carried waste when flushed.

Alexander Cummings adopted a siphon, that is, an S-shaped tube, and it was the solution he adopted to prevent the smell of discarded stool from going back up the toilet drain.

He installed it in the royal palace, but the invention never spread because Queen Elizabeth I used it little out of modesty, due to the great noise of the discharge. The case is that noise indicated that the Queen is using the toilet.

And the sewer networks?

In any case, the absence of sewage systems or septic tanks would have slowed the large-scale use of Harrington’s toilet. It can also be thought that the upper classes would have imitated the queen and the invention would have spread faster.

It took almost two centuries for another Englishman, Alexander Cummings, to take up the idea and invent the first modern toilet. This London watchmaker patented in 1775 a toilet whose operation was governed by the same principle as that of Harrington. In other words, a clean water discharge dragged the waste. Around the same time, in France the Bidet was invented

Its great innovation was that the drain was made through a siphon, an “S” shaped pipe that allows maintaining the level of liquid in the bowl, creating a clean water barrier that prevents bad odors from returning to the toilet. . This made it possible to install the toilet inside the house itself without problems of unpleasant odors. 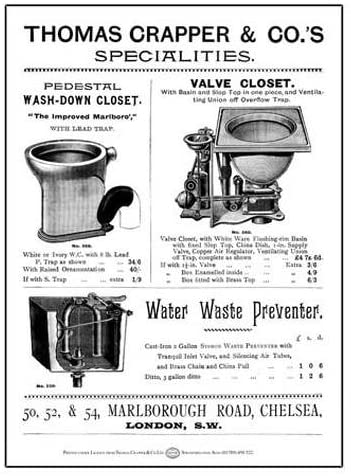 Cummings inserted his toilets into wooden furniture that hid them from view when not in use and contained the device that activated the flush and drain mechanism. However, the system was not perfect. The cistern leaked frequently and the valve installed in the bottom of the toilet, to close the siphon, tended to get clogged.

Joseph Bramah, a cabinetmaker who had installed several Cummings toilet units, corrected the flaws in his design and devised a much more efficient valve to close the siphon. This valve was kept clean thanks to the flow of water. Bramah also added a second valve to close the tank, thus preventing leaks.

The articulations of these valves, which worked by means of springs, were designed to always remain dry, so that they did not block during the winter, when the water got to freeze. A lever opened both valves at the same time and the stream of water reached the bottom of the toilet through a hole covered by a metal plate that prevented splashing out of the bowl. In 1778, Bramah patented his model and marketed it with some success, as it was easier to operate and more efficient than Cummings’. Thereafter, the apparatus continued to be refined.

History of Toilet, The End

Albert Giblin created a model in 1819 very similar to the current ones, without a valve in the bowl. In 1849, Thomas Twyford made the first ceramic toilets. In the 1880s, Thomas Crapper, who had acquired the Giblin patent, invented the float, the cork that serves to automatically shut off the flow of water in the cistern. 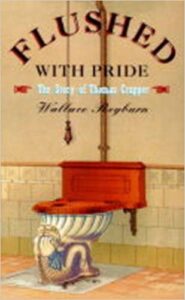 More important was the act of the British Parliament of 1848 that forced the installation of toilets in the new houses, although it would be decades before the water closet or “water closet” reached all the houses.