At the Palace of Versailles, the corner cabinet of Louis XV regains its splendor after 18 months of restoration

After 18 months of work, the restoration of the corner cabinet of the Palace of Versailles, where Louis XV worked, was completed. The restorers have restored the luster to the room and its furniture, restoring the gilding, paintings and marquetry, marked by the passage of time.

The restoration of the corner cabinet at the Palace of Versailles, sponsored by Rolex, was completed around March 20. After 18 months of work on the carpentry, gilding and furnishing of the Louis XV (1715-1774) work table, the restorers have unveiled a lively and dazzling cabinet, as true as possible to its original appearance .

This monumental restoration of an emblematic piece of the building took place in a context where cracks and degradation were increasingly visible. Using traditional techniques used by artisans in the mid-18th century, the bronzes and marbles have been cleaned, the gilding has been restored and the furniture has been consolidated.

The corner cabinet, which had not undergone any actual restoration since 1954, featured tarnished paintings and gilding from the room’s double exposure to the sun, the disjointed or even cracked wood and parquet paneling, and an overall decrepit look, which made it more than necessary. a restoration of great magnitude.

The previous campaign, almost 70 years ago, paradoxically weakened the whole by preventing the woods from working, of course. Changes in temperature, humidity and aging actually cause various deformations of the wood, and the stresses applied to it in 1954 had the effect of creating cracks. Therefore, the teams had to eliminate these harmful and overly rigid consolidations to ensure the durability of the joinery.

Therefore, they made sure to restore the corner furniture to its original state by applying new gold leaves to the rococo style decoration, repainting the walls of the room, consolidating the woodwork and parquet floors.

It was also cleaned by cleaning the furniture and resolidifying it, all in accordance with current regulations. St used the techniques used in the 18th century, particularly with the use of animal tails. The decorations have also been rebuilt following traces that indicate the tearing of certain elements and respecting the general style, so that the cabinet is as close as possible to its original version from the mid-18th century, preserving the additions made under Louis XVIII (1814 -1824). Therefore, the site required very high technical expertise and also allowed restoration students to train in a demanding environment during the 18 months of the site.

The Corner Cabinet, a Political Room

The corner cabinet was not always what it is today. Under Louis XIV, it was used to display the sovereign’s collection of works of art, allowing him to demonstrate his power and influence to the few aristocrats and ambassadors authorized to enter.

Since the reign of Louis XV, things have changed when he asked Ange-Jacques Gabriel (1698-1782) and Jacques Verberckt (1704-1771) to transform the exhibition hall into a study in 1735. The room knows various layouts throughout of the time and notably acquired woodwork at any height, that is, from floor to ceiling, in 1753.

The decoration of the room is extremely refined and features mainly children’s games in a style known as a “rock garden” typical of the Regency. This style, sometimes called Rococo, is characterized by the profusion of arabesques, is inspired by the curved shapes of seashells and gives a privileged place to floral motifs, with light colors, here white and gold

This style is also found in the mirror frames, in which we can see palm tree stems and hunting attributes, as in the furniture and inlays. The room was an office for Louis XV, who often worked there, wrote his correspondence, and made important political decisions.

His successor Louis XVI (1774-1792) stored many personal objects there, which sometimes hang on the wall, as evidenced by the cavities observed by restorers in the walls.

It is also a place of great geopolitical importance as evidenced by the “Independence Candelabra” made to seal the alliance between the nascent United States and the kingdom of France under Louis XVI. It is symbolized by the presence of a base made up of three muzzled leopards, representing the English against whom the separatists and the French form a common front. 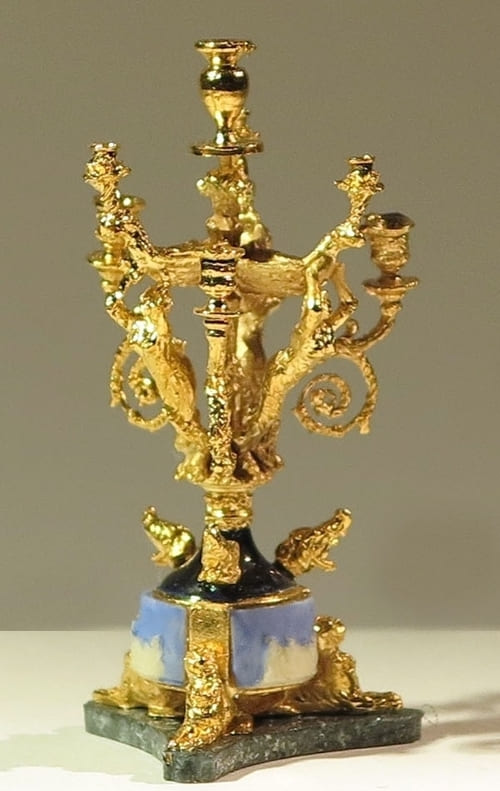 The restoration campaign also restored several pieces of furniture that showed signs of wear and tear. One of the most famous French furniture, it is a cylindrical desk, as ingenious as it is refined. In fact, in addition to its ornate bronze decoration depicting ancient heroes, the cabinet, commissioned in 1760 by Louis XV from Jean-François Oeben (1721-1763), is a feat of ergonomics. It has no less than 15 drawers, 2 wall lights that allow the sovereign to work without worrying about the time, a double dial clock and a locking system that hides the work table and locks it with a key.

Delivered in 1769, after being completed by cabinetmaker Jean-Henri Riesener (1734-1806) after Oeben’s death, it weighs no less than 450 kilos and is adorned with inlays, made of different precious woods, with allegorical designs depicting al Rey, Literature and Sciences.

Its recent restoration, carried out by the Center for Research and Restoration of the Museums of France (C2RMF), has allowed this exceptional piece to recover its former splendor, especially by re-gluing the wood veneers, but also to digitize it completely . and down to the smallest detail, so that one can digitally observe the sophisticated processes and elaborate decorations of this office on the site of the Palace of Versailles. The other furniture was also cleaned and restored, in particular the medal on which new varnish was applied.