Although his father was not an artist, he was talented. Nicolas Boucher was a designer of furniture and decorations. Francois Boucher’s works span almost every genre, but he was especially prominent in the art of painting nudes.

Not only did he paint but he also devoted himself to drawing, engraving and copper engraving. I also do work in interior decoration.

I get to paint Marie-Louise O’Murphy, one of the king’s lovers. She is seen with so much innocence that it seems that the Louis XV is the one who is watching and protecting her

Throughout his life, Francois Boucher was successful and recognized in his work. Member of the Academy in Paris since 1734 ,. He was awarded the Grand Prix of Rome by the Académie royale de peinture et de sculpture. The king’s favor, who named Boucher the first painter at court in 1765, remained unchanged until his death. 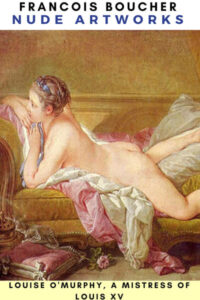